“Leonard and Hungry Paul: A Novel” by Ronan Hession 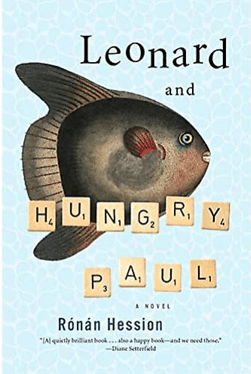 A co-worker at the library and I recently found ourselves loving the same books, without having suggested them to each other, so it was with great enthusiasm that I checked out one of her favorites, “Leonard and Hungry Paul”.

“What’s it about?”, I asked her, to which she responded that it was basically about two nice, content thirty-something men who live with their parents, are best friends and don’t do much of anything especially exciting (they do love a good game of Scrabble), but go about being decent human beings while facing challenges like the rest of us do.  They are not trying to be super-heroes, they are just living their lives without hurting anyone.  Nice guys.  Since my own life has been quite stressful lately, I decided to give this pleasant-sounding book a try.

Right off the bat, I enjoyed the writer’s style.  We are introduced to Leonard and Hungry Paul as they go about their lives.  Neither one is a super-spy.  Neither one has a “power job”, and they certainly don’t care about climbing the ladder to success for wealth and riches.  Leonard, for instance, is a children’s encyclopedia writer, and he loves it.  He really loves the idea of making history accessible and interesting for others, especially the next generation.  Although his name isn’t published on his books, but rather under the name of the man who he ghost-writes for, he really doesn’t care about the recognition, even when they’re quite successful.  He’s just thrilled that they are valuable reference books that he contributed (a lot!) to.  Leonard grew up without a father, and his mother (who he lived with all of his life) recently passed away.  He is aware that his world is changing.

Hungry Paul lives with his parents, who can best be described as kind people, generous of spirit.  It doesn’t bother him one bit that he is an adult who has never flown the nest. He really seems to have no traditional “ambitions” whatsoever, with the exception of getting to his very part-time, as needed, postal delivery job on time.  Hungry Paul’s older sister, Grace is about to be married.  She is well-liked, kind, and follows what society seems to view as the more traditional path of a young adult…school, career, marriage, etc.  She has always taken care of Hungry Paul, as have his parents, but she’s starting to worry about what will happen to him as her parents age.  Hungry Paul is never labeled with any kind of disorder, he just seems to have a very unique way of looking at life and has always been different.  During one early scene, when we are introduced to Hungry Paul’s home and family, his parents are enjoying their evening with a jigsaw puzzle, listening to and engaging in a television quiz show, and enjoying an early Easter egg treat (in my mind that Easter egg treat is a big chocolate egg!).  Perhaps this beautiful scene of contentment alone is what keeps Hungry Paul from leaving home.  I, myself, lost my parents a long time ago and I can’t tell you how many times I’ve had dreams recalling simple moments like this with them and thinking “if only”.

I fell in love with this book during one scene, early on, when Leonard and Hungry Paul are playing Yahtzee, and the conversation turns cosmic.  Leonard and Hungry Paul are both intelligent men who are fascinated by the universe.  The writing that accompanies Leonard’s exit from the house, when it’s time for him to go home, is so simplistic, but so beautiful as the two friends gaze at the night sky.  It’s little touches like these that make this such a charming read.

From an interview with the author, Ronan Hession, (who is a successful Irish musician, by the way, which might explain his gentle spirit):  “Leonard & Hungry Paul is really a novel about gentle people finding their way in the world.  People who are uncertain about themselves, uncertain about the world, and who have spent a portion of their lives trying to stay out of trouble and stay out of engaging with the wider world – but then their lives change.  Leonard is a ghostwriter of children’s encyclopedias and when his mother passes away he has to come to terms with his place in the world.  Hungry Paul is his best friend who is happily part of a nice family but the family is going through change – his parents are getting older and his sister is getting married and that raises all sorts of questions for him”.

Change does come, indeed, but no worries … there are no zombie apocalypse issues to deal with here.  The changes are realistic, human issues that many of us face, and I only wish more of us could deal with them with the intelligence, strength and wisdom of Leonard and Hungry Paul.  As the book drew to a close, I wanted more of those quiet game nights with these two lovely men.  My wish for you is that you can feel the same.