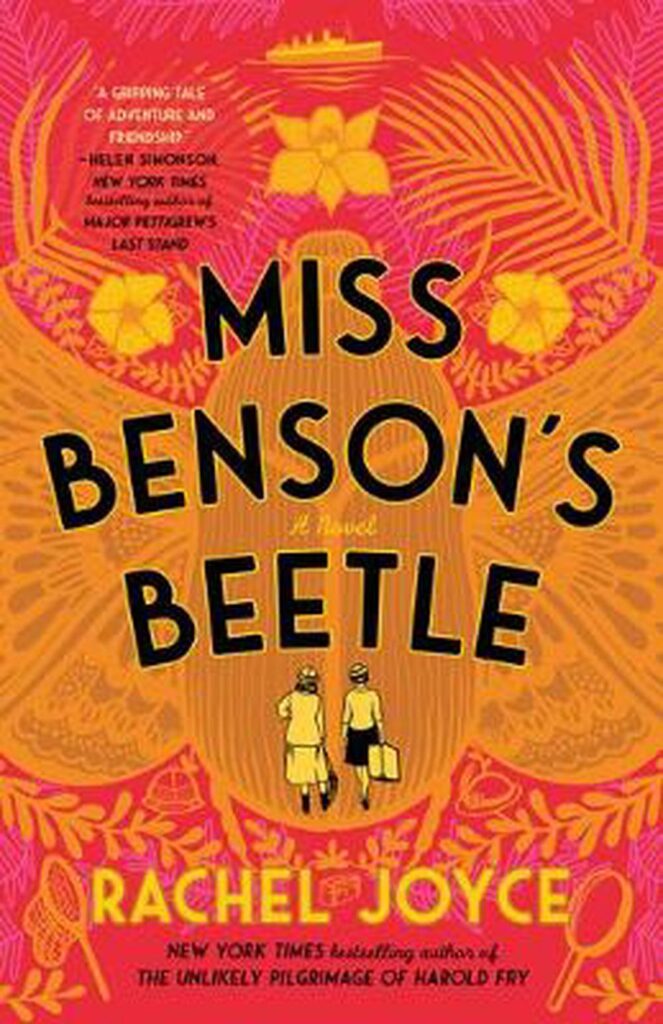 Margery Benson is stuck.  She is a large woman in her mid-40s, a schoolteacher for many years in a girls’ school.  She is lonely, financially struggling, bereft of dreams, sad, living a repetitive and unfulfilling life.  Once she did have a dream . . . to find a magical golden beetle like the one in her father’s special book.  She obsessed about this, studied beetles, caught beetles.  But life in its worst form got in the way.  Margery has suffered such losses, and such a lack of love.  Her life has been put on hold, the same drudgery day after day.

And then one day, in London of 1950, a city still suffering the effects of World War ll, she cracks.  Naughty school girls mocking her push her over the edge, and she just walks away.  She goes home and decides to leave in search of her long-deferred dream.  She decides to travel to New Caledonia, on the other side of the world, and hunt for the gold beetle.  Of course, she will need an assistant, so she advertises for one.

Four people apply, but one isn’t even considered.  With bad spelling and grammar, her response is written on a shopping list – she is totally unsuitable.  But the others aren’t better.  Some don’t want the job of travelling around the world to hack through a jungle on what seems like an impossible mission.  And one is a man, clearly unstable after time as a POW during the war.  She decides to contact Enid Pretty.

Well, Enid is nothing like an assistant should be.  She is inappropriately dress, too talkative, lacking the skills needed.  But she is all that orderly Margery has, so off they go.  Throughout the book the two women learn to tolerate, help, and even care about each other.  They have many adventures and misadventures; their trip is very unpredictable.

Do you want to follow along on their journey, both geographically and metaphorically as they reach into themselves and discover who they really could be?  As they both strive for their combined and separate dreams?  These ladies are characters that you can’t forget.  This is a wonderful book about the transformative power of friendship!