“The Five: The Untold Lives of the Women Killed by Jack the Ripper” by Halley Rubenhold 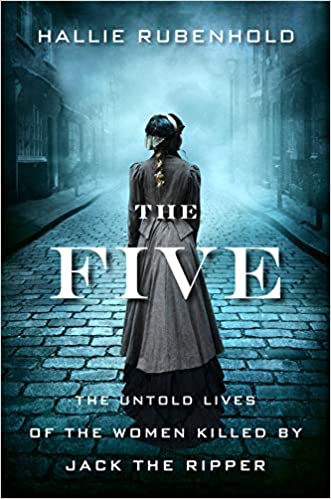 We have all heard about Jack the Ripper, the monstrous serial killer who slaughtered women in 1888 in Victorian era London.  But what do we know of those he killed?  Is it important that we know about them?  Hallie Rubenhold thinks so and wrote a book showing them to be the individuals that they were:  women of lesser means trying to survive in an unforgiving world.

Polly, Annie, Elizabeth, Catherine and Mary-Jane are famous for the same thing, though they never met.  They came from Fleet Street, Knightsbridge, Wolverhampton, Sweden and Wales.  They wrote ballads, ran coffee houses, lived on country estates, they breathed ink-dust from printing presses and escaped people-traffickers. What they had in common was the year of their murders: 1888.  The person responsible was never identified, but the character created by the press to fill that gap has become far more famous than any of these five women.

For more than a century, newspapers have been keen to tell us that ‘the Ripper’ preyed on prostitutes. Not only is this untrue, as historian Hallie Rubenhold has discovered, it has prevented the real stories of these fascinating women from being told.  Now, in this devastating narrative of five lives, Rubenhold finally sets the record straight, revealing a world not just of Dickens and Queen Victoria, but of poverty, homelessness and rampant misogyny.  They died because they were in the wrong place at the wrong time – but their greatest misfortune was to be born a woman.

Hallie Rubenhold uses her historical research skills to track down sources about each of these women and pieces the information together to create a narrative that not only informs, but humanizes, these five.  You come to see them as daughters, sisters, wives, mothers, friends.  They are people trying to make a living in a tough time period, where jobs are few for women and pay is minimal.  They tried to do their best by their families, but fate and relationships and illness got in the way.  They are real people with emotions, strengths, weaknesses, and loves.  They should not have been reduced to the category of “prostitute”, of fallen women perhaps courting their own deaths.  That is not a fair depiction of who these ladies were in life.

Although other similar murders of women occurred during this time frame, these five are considered the “canonical five.”  The police were unable to conclusively determine whether they were the work of “Jack the Ripper”, a killer copycat, or another serial murderer who happened to kill during about the same period of time.  Polly, Annie, Elizabeth, Catherine and Mary-Jane do appear to be the work of the same person, so these are the women that Rubenhold chose for her focus.

We may never know who was truly “Jack the Ripper” or why he was never caught or identified.  We know that he was a deranged soul, victimizing the weak and helpless “fairer” sex.  He is no hero, no titillating personality.  The women he preyed upon never deserved their deaths at his hand.

This is an excellent book, written more like a novel than the non-fiction work that it is.