“The Personal Librarian” by Marie Benedict 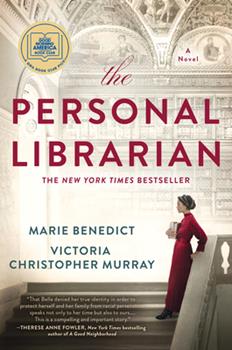 I appreciate that the author, Marie Benedict, delves into the lives of historical women, both well-known and obscured by time.  She brings these ladies to life and puts you in a time and place that are unfamiliar to you.  You learn a lot about the time period, mores of society, constraints on persons of different genders, races and social classes, as well as what life was like for that particular person herself.  She makes them blood and bone, and very much alive to her readers!

In this book, she presents the life of Belle da Costa Greene, a woman who became the personal librarian to one of the most powerful and famous men of her era, J. Pierpont Morgan. That Belle achieves this is amazing, because unbeknownst to the people she works for, works with and socializes with, Belle’s parents are Black.  This is a time when Blacks were kept “in their place”, limited to less than the best in education, profession, and communities that would accept them as residents.  This is a substantial impediment to Belle’s life goals.

Belle is intelligent, hard-working and focused on procuring a career for herself and earning enough money to assist her struggling family after her father deserts them.  You feel her concerns and the care taken to keep her background secret as she develops herself into a knowledgeable, educated, and cultured woman.  She is shown to be driven and very clever in achieving her goals.

“The remarkable, little-known story of Belle da Costa Greene, J. P. Morgan’s personal librarian-who became one of the most powerful women in New York despite the dangerous secret she kept in order to make her dreams come true, from New York Times bestselling author Marie Benedict and acclaimed author Victoria Christopher Murray. In her twenties, Belle da Costa Greene is hired by J. Pierpont Morgan to curate a collection of rare manuscripts, books, and artwork for his newly built Morgan Library. Belle becomes a fixture on the New York society scene and one of the most powerful people in the art and book world, known for her impeccable taste and shrewd negotiating for critical works as she helps build a world-class collection. But Belle has a secret, one she must protect at all costs. She was born not Belle da Costa Greene but Belle Marion Greener. She is the daughter of Richard Greener, the first Black graduate of Harvard and well-known advocate for equality. Belle’s complexion isn’t dark because of her alleged Portuguese heritage that lets her pass as white-her complexion is dark because she is African American. The Personal Librarian tells the story of an extraordinary woman, famous for her intellect, style, and wit, and shares the lengths she must go-for the protection of her family and her legacy-to preserve her carefully crafted white identity in the racist world in which she lives”—(Provided by publisher.)

If you love books, art and the early twentieth century, there is something for you in this book!  Like me, I hope you will read Marie Benedict’s other books and meet some very remarkable women!